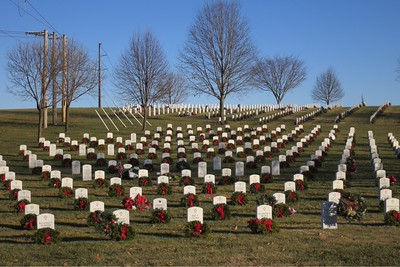 Good morning. We just passed thru Culpepper, Virginia and this cemetery. Soldiers standing at attention. All dressed up for Christmas.

Sleep came a little slowly last night as we were stopping every half hour of so at smaller depots along the line. Finally sleepiness took over and I managed to get a few hours of rest. I’d love a shower – but that will need to wait.

The overnight stretch took us thru North and South Carolina and into Virginia, stopping at Lynchburg just prior to Culpepper. Lynchburg is not far from Appomattox where General Lee and General Grant called an end to the Civil War. We continue north to Manassas, which served as an important railway crossing during the civil war and the site of two battles, and Alexandria before arriving in Washington DC.

The view from my window began to roll with the Blue Ridge Mountains rising in the distance as we came into Charlottesville earlier this morning. I remember watching the Walton’s as a child and even today and know that Charlottesville was where John Boy and his family went into town to do big city work. I looked up at the top of some of those hills and imagined him and his brothers and sisters and their parents working the lumber mill or running to Ike’s store for some sugar. All of these things whether real life history or a childhood TV memory make the trip more personal and not just a means to an end.

Sitting in the lounge car this morning I had a long conversation with a delightful African American man just a year older than my father. We talked of travel, places he’d lived and jobs he’d had. We talked about race relations. We talked about God and family. We found many things we agreed on and had in common. When I told him there were 2 little boys waiting for me at the end of this trip he reached into his wallet and handed me two $2 bills to give to Grayton and Henry. One of them from 1976. The other from 2009 – the last year they were made. He said he’s been handing out $2 to various people he meets for the last 7 years. I have not seen one for a long time but I can’t wait to give them to the boys. What a sweet treasure. 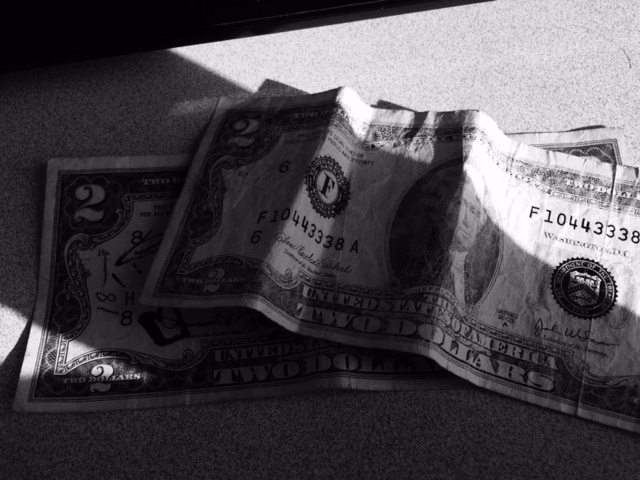 8 more stops. I’ll try to write a little more as we closer to the city. Merry Christmas Eve Eve,  y’all.